Polarizing and provocative pop-rock outfit The 1975 have only striven harder and harder to make the kind of experimental and mind-opening music to match what often comes across as delusions of grandeur and strained connections of their work to global activism as their careers have progressed. After somewhat of a breakthrough with their past album, A Brief Inquiry Into Online Relationships, The 1975 come out with their most love-it-or-hate-it project yet – as hilariously evidenced by not only a perfect score, but also a 1/10 and a 5/10 on the reviews segment of its Wikipedia page. A wildly genre-hopping 80-minute project that contains numerous ambient instrumental interludes, musings on a wide swath of social issues and opens with a 5-minute original speech by teen climate activist Greta Thunberg, the band have certainly come a long way from their mundane and nondescript beginnings. Of course, frontman Matty Healy’s lyrics can be as ridiculous as ever, and sonically they sometimes take a huge swing and miss, but their penchant for a great hook and – who would have ever guessed – even a little bit of comedic self-awareness make this one the band’s most admirable collection yet.

The chaos of what you’re getting yourself into becomes quite evident after the aforementioned Thunberg speech suddenly takes a tumble into the screaming industrial punk track “People,” a complete left turn in sound for the band that never returns as Healy responds to the speech by counting down the days to extinction and repeatedly urging people to “wake up” over some blown-out wailing guitars. For a band that I often wish explored the issues they seem so passionate about further, you have to admire Healy’s sudden injection of frenetic passion here, sounding absolutely distressed and shocked at people’s inaction. At the very least, placing such a surprise at the start certainly got me excited about what was to come. The second vocal track “Frail State Of Mind” introduces what is clearly one of the band’s biggest new influences in the electronic sounds of UK garage and trip-hop, the glitchy percussion skipping wildly across quite a few of these tracks and backing up Healy’s softly crooned vocals instead of the more typical abrasive palates in what proves to be an engaging move. At times, however, their tendency to rely on the instrumental and chopped-up vocal samples while using this style does result in a couple of these tracks feeling underwritten, most notably the track “Yeah I Know” which follows shortly thereafter. Healy’s vocals are oddly processed and monotone on the verses, before a very minimal and repetitive pitched-up chorus. The style is used to its greatest effect on the track “I Think There’s Something You Should Know,” the hi-hats and bass bouncing off a fuller piano mix as Healy offers up a series of confessions about his muddled mental state. 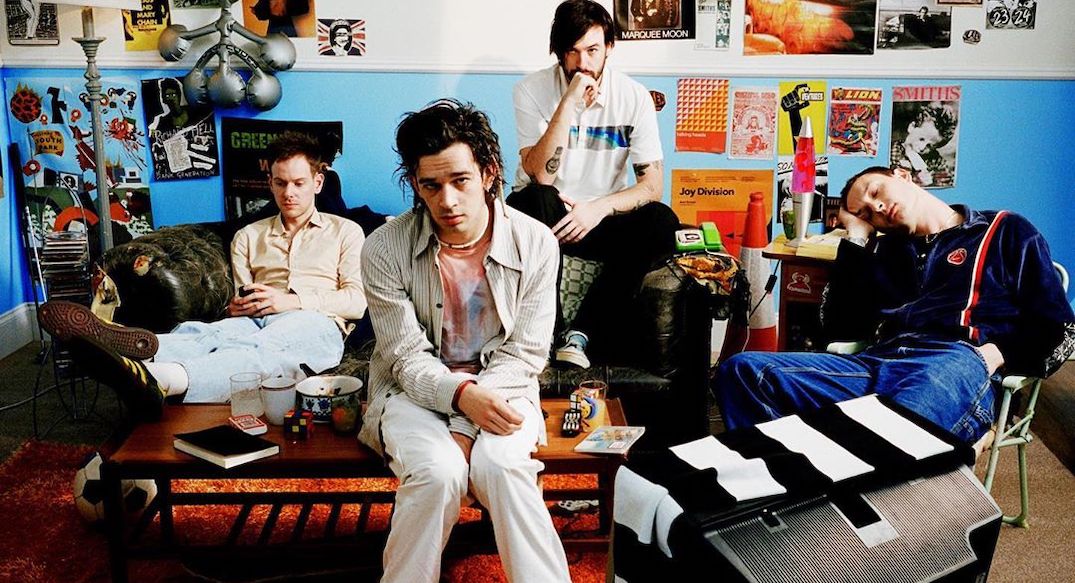 The band gets most of their half-baked ideas out of the way in the early goings of the tracklisting – “Then Because She Goes” is another experimental choice that quickly goes off the rails as the band attempts to recreate the kind of noisy shoegaze goodness of 90s pop-rock but comes through with a very muddy and borderline unlistenable mix – but the real highlight of the opening run is the track “The Birthday Party.” For an album that many accuse of being disjointed, I appreciate its connection to Healy’s discussion of his social anxiety in “Frail State of Mind,” as he uses the following track to spin a kind of Father John Misty-esque self-deprecating story of a series of awkward and uninteresting interactions at a house party in his surprisingly smooth lower register, coasting over a calming mid-tempo groove enhanced by a couple orchestral solos and a banjo that pops up periodically in the mix. Healy has a charming vocal delivery and a couple funny lyrics before poignantly dropping the bomb at the end of the track that he goes to these undesirable social functions so that others hold him accountable for staying clean, after recently beating a lifelong struggle with drug addiction. The excellent pairing of calming acoustic vibes and heart-wrenching lyrics of the album’s first half continues on the track “Jesus Christ 2005 God Bless America,” where Healy projects his personal struggles with religion onto the character of a gay man grappling with his real-life romantic feelings disagreeing with his love for his faith. The storytelling and emotional vocal delivery is only enhanced by the presence of Phoebe Bridgers, who sounds absolutely beautiful harmonizing with Healy and offers a similar female perspective on the second verse.

By its middle, the album steadily transitions into massive, anthemic pop hooks as well as some of its better sonic experiments and Healy finally letting up a little on the self-seriousness. The track “Roadkill” adopts an upbeat and appropriately twangy country vibe as Healy offers some amusing anecdotes about the ridiculousness of some attitudes he ran into while touring the American South, becoming refreshingly self-aware in one key lyric as he addresses the self-imposed unrealistic expectations placed on him to speak out against any and all social issues. “Me & You Together Song” is the track that most resembles their earlier work, improving the formula with a delightfully jangly 90s-pop mix and starry-eyed romantic lyrics and kicking off a long run of tracks where The 1975 really flex their stadium-sized muscles. The band used a gospel choir to outstanding effect on their last album and the choral arrangements return in a big way to the shimmering track “Nothing Revealed/Everything Denied,” Healy exasperatedly searching for the truth in an increasingly confusing world before he drops into a soulful lo-fi hip-hop groove and confesses about embellishing a little in his previous songs at a time that needs his full honesty. With an impressively hard-hitting Jamaican dancehall interlude performed by Cutty Ranks in between them, the tracks “Tonight (I Wish I Was Your Boy)” and “If You’re Too Shy (Let Me Know)” lean even harder into finding that extravagant pop euphoria with their hooks. The former introduces itself with a decidedly Kanye-inspired pitched-up soul sample before dropping into an almost reggae tempo and an instantly iconic, sweetly sung hook that climaxes as all instruments but a triumphant horn section drop away near the end of the track, while the latter takes a look at double standards of how intimacy is viewed when separated by a computer screen as Healy’s interaction with a camgirl is soundtracked by rubbery synth-bass, classic-sounding guitar stabs and a jubilant falsetto melody. 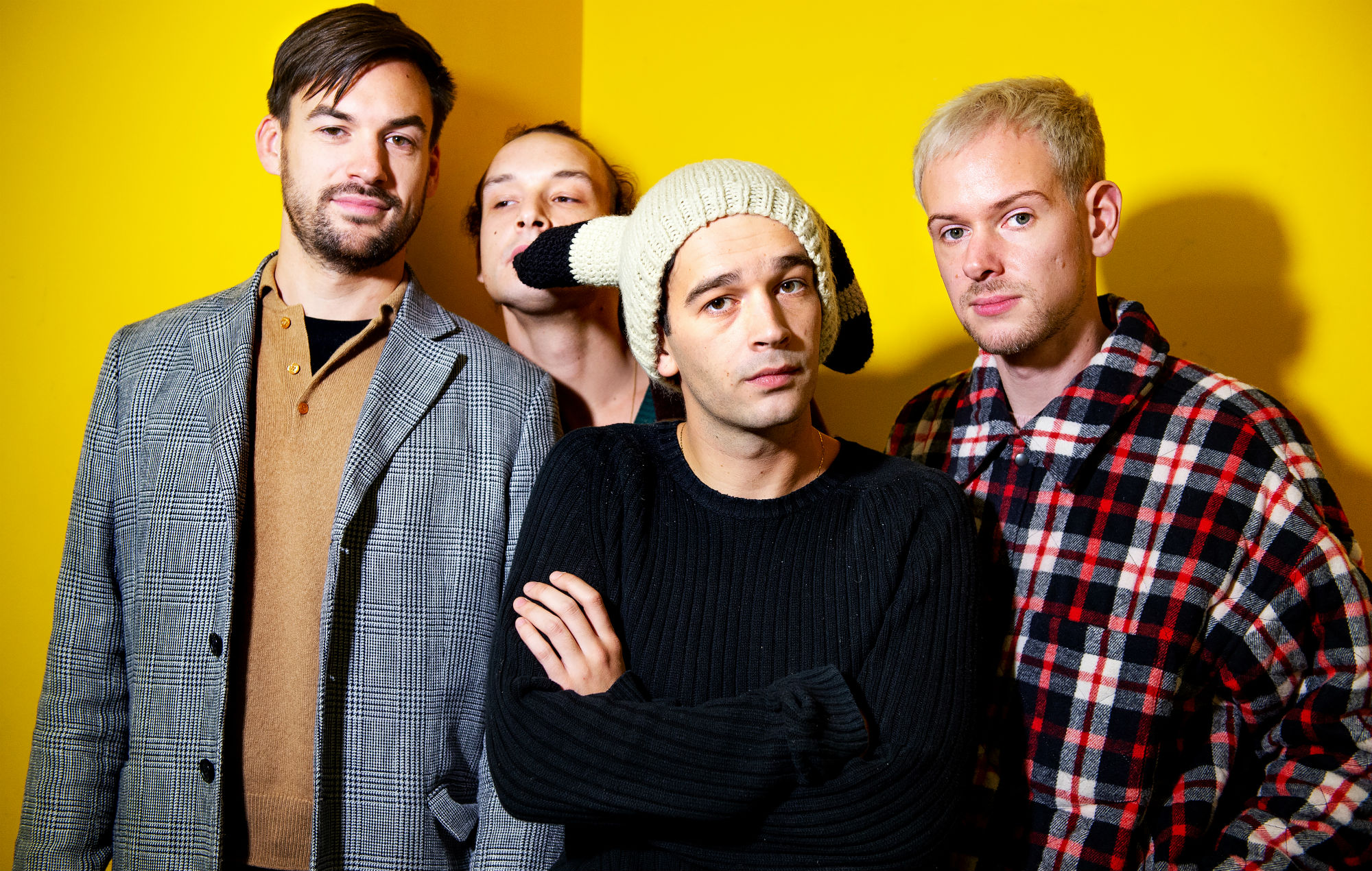 The album’s final series of tracks close things out on a more emotional note, the raw and acoustic “Playing On My Mind” offering some great layered harmonies as Healy tacks on a couple more deep existential questions and some more hilarious jabs at himself – “I won’t get clothes online ‘cause I get worried about the fit, but that rule don’t apply concerning my relationships” is an absolutely elite lyric. The track “What Should I Say” is built around a looped vocal from the inimitable FKA Twigs, but the final two tracks are an overwhelming one-two punch that should get the tears flowing. Healy describes “Don’t Worry,” a song penned 30 years ago by his father, as what he believes to be the first song he ever heard as it was sung to him in his crib, and he recruits his father to sing it with him here. A simple and beautiful declaration of pure love, hearing the two Healys combine on the piano ballad is absolutely stunning. The album closes with “Guys,” as Healy expresses his appreciation for his bandmates while calling their friendship and musical union “the best thing that ever happened.”

As someone who admittedly used to be quite the detractor of this band, seeing them learn from their mistakes and venture ever closer to being the kind of envelope-pushers they viewed themselves as from the beginning has been a surprising and enjoyable experience. The 1975 throw just about everything at the wall over the course of this album, and for the first time, a vast majority of it sticks.

Favourite Tracks: Don’t Worry, Tonight (I Wish I Was Your Boy), If You’re Too Shy (Let Me Know), Nothing Revealed/Everything Denied, Jesus Christ 2005 God Bless America