The social media experiment slash performance art piece slash genuine musician that is Poppy has certainly been one of the most fascinating and consistently disorienting musical developments to follow over the past several years. Transitioning from YouTube videos featuring absurdist and satirical social commentary to music where she taps into a friendly, cheerful robot persona with lyrics steadily getting more murderously violent as her videos once did, Poppy has since broken free from her agreement with the mastermind behind it all and taken a new creative direction. After allegations rang out from around the music industry of producer and director Titanic Sinclair’s manipulative ways, Poppy has distanced herself from him and seems to have abandoned the character they created together, acting normally in interviews and getting quite personal about her dealings with him on this new project. Still, with her lyrics as apocalyptic as ever, it’s hard to be sure, and that’s part of the beauty – and terror – of Poppy.

While we’ve heard glimpses of abrasive nu-metal breaking through her cutesy aesthetics before, Poppy is now signed to a legitimate metal music label. While Poppy’s experimentation as she tries to find a perfect fusion between the two very disparate sides of her music is admirable, it seems that a lot of the excellent pop sensibilities she once had are foregone for shock value. 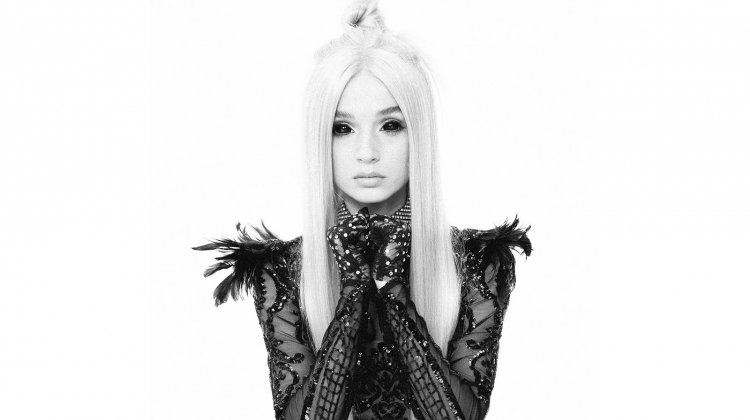 The opening track “Concrete” is actually the best one here – it’s tough to make this marriage of genres last across 10 tracks, but they certainly picked the most successful experiment to start this one off. Opening with the wail of a siren as ominous whispered vocals start layering on top of each other, a full-blown nu-metal riff breaks out before immediately diving into one of the sweetest pop choruses she’s ever laid down that somehow fits perfectly over the thrash metal guitars underneath. This, of course, only lasts a couple seconds before crumbling apart into what is probably the grimmest musical segment on the entire project, the screaming backing vocals sounding absolutely tortured as the drums play out a death rattle. Alternate back and forth, with progressively more terrifying lyrics creeping into the sweeter parts. Finally, the fans chant her name as she finally flips the first growled chorus into starry-eyed arena rock, still wishing for death. Of course, the Poppy character’s imagined litany of fans – or cultlike members of her “church” – never seem to notice or care, content to idolize the perfect celebrity figure on the surface level. It’s all part of the seemingly intentional blurring together of the malevolent robot and Poppy’s real-life experiences.

After “Concrete,” the music gets less engaging, but the ideas get more. The video for the end-of-the-world anthem title track “I Disagree” features Poppy creating a giant bonfire out of the bodies of label executives, and there’s quite a bit of rebellion against the systems of the music industry through thinly veiled aggression at her former collaborator across these tracks. Tracks like “Nothing I Need” and “Sit/Stay” address Poppy’s rise to fame and realizing that the struggles that come along with the glory was nothing that she could have imagined, detailing the extensive creative controls that were put on her and ending the latter by repeating “I will not obey you.” The final two tracks seem to be hinting at a depressive state that she had to fight through when choosing to embark on this new direction in her career.

Hearing Poppy’s angrier, screaming vocals on nearly ever track here is certainly shocking after the knowledge of just how angelic and beautiful her pop-music singing voice is, but they work best as a brief tonal contrast. The acidic and glitchy manipulations of grungy guitar strums on a track like “BLOODMONEY” while Poppy uses every bit of air in her lungs to scream a repetitive triplet flow on top is certainly a lot to take in, and has me wishing for the days when there was a bit more nuance to the more twisted ideas she presents to the audience. Of course, that was all a fabrication, and this seems to be her real life, so it can be tough to evaluate this album critically at times. Poppy goes directly for the jugular on the subsequent track “Anything Like Me,” where there can be no question that she is addressing the Titanic Sinclair drama and copyright lawsuits that came out of his modelling Poppy in an eerily similar way to his previous project with singer Mars Argo. Like most of the project, it’s more of a disturbing expression of legitimate distress than an enjoyable song.

The way ideas jump around wildly here, a motif never sticking around for more than 30 seconds, reminds me of last year’s excellent 1000 gecs from experimental duo 100 gecs, but this isn’t coming from the same place of gleeful insanity. This is more of an exorcism of demons for Poppy – or rather, Moriah Pereira, the real human behind it all – and that doesn’t always translate into great music as she is finally permitted to scream it all out into the world. It’s undeniably powerful stuff, but I’m not sure how much I’ll be returning.

Favourite Tracks: Concrete, I Disagree, Nothing I Need, Fill The Crown