Swedish folk duo First Aid Kit’s fourth studio album continues to display the sisters’ airtight harmonies and excellent storytelling while settling into a satisfying and consistent niche throughout its 10 tracks. While the album isn’t particularly abundant in musical risks, this is the sound of a band in full control of what works well for them, and they deliver some enchanting fireside melodies here. First Aid Kit edge slightly closer to country territory on this project, their vocals possessing a slight twang over the trademark acoustic picking and background strings. 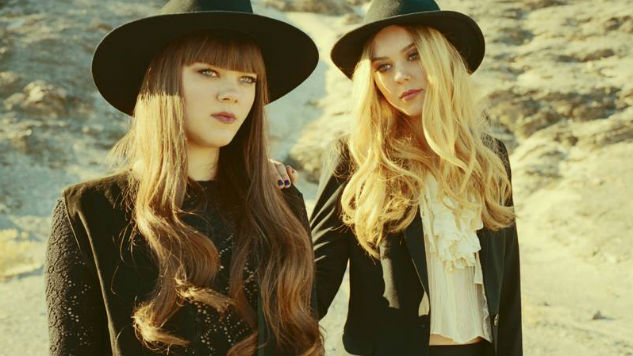 One of the greatest strengths of the project is the consistent ability to surprise when you think their songs are one-dimensional. Opening track “Rebel Heart”, despite its emotionally powerful chorus, doesn’t change much in terms of energy throughout its first two-thirds before a brief moment of silence – which I thought signaled the end of the track – gives way to a much more upbeat and rhythmically complex instrumental section, the vocals coming back strong on top.

The sisters are masters of the slow build, often beginning tracks quietly before the instrumentation swells and the harmonies kick in stronger than before for some truly captivating vocal moments. I wish “To Live A Life” lasted a bit longer, the power they display at the end of the track isn’t quite satisfying for how much buildup it took to get there, but it’s a great example of how well they can pull off sudden shifts in energy. Another great moment is the bridge of “Distant Star”, which suddenly twists the bright major key with some more ominous notes that are barely noticeable, but give the track a definite and inexplicable feeling of unease that fits with their unsuspectingly dark lyrical themes.

“It’s A Shame” is possibly the greatest vocal showcase on the album, backed by a stronger foundation of some quicker guitar chords for the sisters to get a bit louder over. The harmonies are at their cleanest on the chorus, the artists’ proclaimed love for Fleetwood Mac’s Rumours never more evident as they juxtapose their rather grim lyrics about loneliness with the sunniest sounding song here.

I really do love the interplay between their voices here, the album is seriously carried by the vocal talent more than anything else. The breaks in their voice as they jump up to a higher note and the slight melismatic tone throughout is somehow perfect for the brand of stark, confessional lyrics. They frequently sing over constant harmonized vocal support in the instrumental, a track like “Fireworks” bringing it all together perfectly.

Despite the project’s shorter runtime, there are a few noticeably weaker tracks. When the sisters aren’t at the top of their game vocally their approach to the genre doesn’t really bring anything new to the table. A track like “Postcard” is more subdued vocally, and does contain a great piano solo midway through the track, but the instrumental is at its closest to classic country tricks here, and I feel like I’ve heard this track quite a few times before.

Additionally, the more powerful moments on this album make the tracks that don’t spend as much time progressing towards a triumphant goal at the end feel much weaker – “My Wild Sweet Love” never really reaches a climax as immediately captivating as its counterparts. The full-voiced belt seriously takes the listener aback, often dropping on them unsuspectingly, its what makes you really admire the full extent of the musicianship here.

Ruins is a very solid effort that continues to establish First Aid Kit as they slowly assert themselves in the public consciousness. The level of raw talent and songwriting ability here is impressive – the band knows exactly what they’re doing right.

Favourite Tracks: It’s A Shame, Fireworks, Hem Of Her Dress, Rebel Heart, To Live A Life