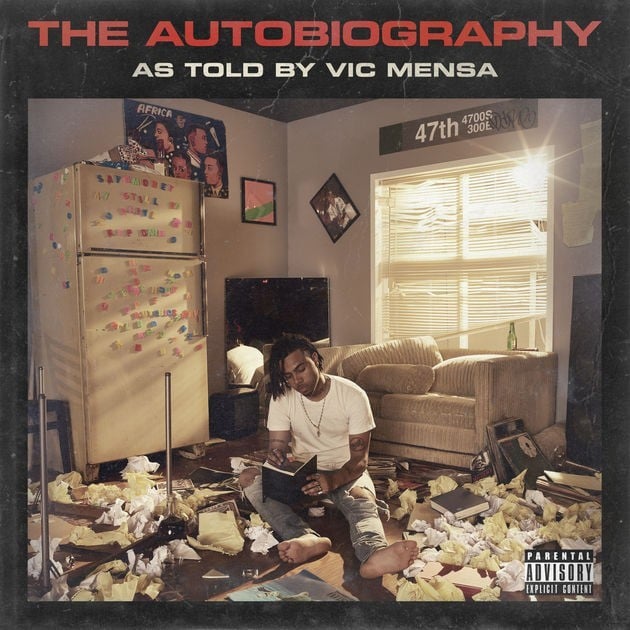 Chicago rapper Vic Mensa’s debut album has been in the works for a very long time. With the incredible 2013 mixtape INNANETAPE and EP There’s Alot Going On under his belt, The Autobiography is finally being delivered to us in the wake of many problems in Mensa’s life. The introspective lyricist was seemingly lost for a while, releasing subpar throwaway singles. He revealed on There’s Alot Going On that this was due to suicidal thoughts, drug abuse and a toxic relationship, and he continues to address these issues on his very personal lyrics on this project.

Now that a full project from Mensa is finally here, it’s a lot more inconsistent than I would have expected. Despite Mensa’s frequent lyrical flashes, he is certainly not without his occasional misguided concept or questionable singing voice and delivery. There are a lot of great musical moments on here, but for a project with a title as ambitious as The Autobiography, Mensa leaves a lot to be desired.

Mensa recruits a few high-profile producers, including The-Dream, Pharrell Williams, who features on “Wings”, and the legendary No I.D., who plays supplementary roles to lesser-known Chicago area producers on almost every track here. I give props to the producers and Mensa for the project not being very trap-influenced and riding trends, the unique rock-influenced instrumentals fitting Mensa’s aesthetic better.

For someone who is known for their lyricism, a lot of the greatest moments on this album are actually due to the instrumentals. Mensa’s inspirations are quite obvious on this album and some of the greatest tracks here resemble some of Kanye’s early work – both in terms of his complexity and soul sampling, and the stadium rap of Graduation. Even though it’s an overused sample, the flip of Darondo’s “Didn’t I” on the opening track of the same name complements Mensa’s erratic flow well. The innate rhythms of the soul track in its walking bassline and syncopated guitar stabs highlight his technical abilities.

The Graduation-style tracks make things a lot more anthemic on tracks like “Rollin’ Like A Stoner”. The track brings to mind Kid Cudi’s more pop-driven early tracks as he shouts the chorus and the synths blare. Mensa knows exactly what he is doing when he speaks about the dangers of drug abuse on a catchy party track, knowing it will go right over some people’s heads.

Mensa’s lyricism is very compelling when at its best, such as on tracks like “Wings”. Mensa describes himself spreading his wings and leaving his problems in his past. The lyrical and emotional peak of the album comes when he lets the voices in his head take over the second verse, yelling at him to end his life and that he’s an embarrassment before he breaks free at the track’s conclusion.

Mensa seems to really struggle with originality here. His flow on Innanetape was refreshing and different, but here he adapts so much to J. Cole’s style of storytelling that he picks up his flow on almost every track. He has elements of Kanye in his cadence, and doesn’t even try to hide how much of a blatant rip-off of Eminem’s hit “Stan” “Heaven On Earth” is.

It additionally makes it hard for me to get invested in Mensa’s lyrics when some of the song concepts here either don’t make much sense or are downright offensive. The back-to-back tracks “Homewrecker” and “Gorgeous” address Mensa’s past disastrous relationship, getting very specific and personal about scenarios where the two got into violent physical altercations.

Mensa criticizes his partner’s behaviour for destroying his property and calls her “crazy”, acting as if he did nothing to provoke her. Mensa’s reveals she acted in this way after he was caught cheating, but he quickly skims over this detail and even tries to justify it. Instead of showing a shred of remorse, Mensa tries to convince us that he absolutely had to do it – they’re both “Gorgeous”. A cringeworthy punchline in reference to the band Smashing Pumpkins only adds to the nonsense.

On “Heaven On Earth”, Mensa’s deceased friend calls him from Heaven to inform him – good news – Kurt Cobain loves his music, and he said Vic is “on the right path”. It’s maddeningly self-righteous for someone who just put out their debut album.

Mensa’s delivery is pretty terrible at times – “Memories on 47th St.” is a middling track that could have been injected with a bit more energy during the raps, but it is brought way down when he reaches into his upper register on the chorus and can’t actually hold a note. “Coffee & Cigarettes” shows this at it’s absolute worst. The instrumental is quite empty, and Mensa sings throughout the whole track with some romantic lyrics directed at the same girl from the earlier tracks. He sounds very immature in his approach to everything, and it’s not even believable due to his antagonism towards her earlier. By the time he’s wishing she loved him “even half as much as weed” halfway through the track, I’m completely over what he has to say.

It’s clear that despite what Mensa states on “Wings”, he’s still a pretty troubled individual and we can never be sure what we’re going to receive from him. It’s a shame because Mensa is so naturally talented and he’s demonstrated this on many occasions. I can only hope he continues to work on himself and hits us with another INNANETAPE in the future.

Favourite Tracks: Down For Some Ignorance (Ghetto Lullaby), Rollin’ Like A Stoner, Didn’t I (Say I Didn’t), Wings