Swedish electropop band Little Dragon is now on their fifth studio album in the wake of critical acclaim and numerous well-received features. Yukimi Nagano’s unique voice and the eclectic, 80s-channeling synths from the rest of the band have appeared on albums by such artists as Flume, Mac Miller and Kaytranada recently, and as these appearances continue to increase the visibility of the band, I can’t help but think that their own album became somewhat of an afterthought.

As more and more artists gravitate closer to this sound, recreating the moodier aspects that the decade of music had to offer, some distinct and creative characteristics are needed in order to stand out. Season High  is a perfectly serviceable collection of tracks from a band who may have contributed most heavily to kickstarting a musical movement, but I’m not sure I’ll remember it by year’s end.

Little Dragon doesn’t deviate from the sound that made them famous, but blends genres together into something that would be distinctive if it wasn’t what was all over the radio right now. However, there are certainly some special aspects here that make them more enjoyable than the typical pop artist – Nagano’s voice is versatile enough to save any misguided concept at times, while the spontaneous experimental decisions have an inconsistent track record at working effectively. The combination of a pitched-down human voice with the synth line on “Celebrate” is an interesting and new sound that works well, while the blistering guitar solo that appears out of nowhere on the same track doesn’t. The album applies a dreamy, synthpop sound to Nagano’s warm, soulful vocals, but remains too atmospheric and frequently fails to grab my attention.

For all the work that is put into the instrumentals of these tracks, it is easy to see why many artists are calling for Nagano’s vocals to appear on their albums instead. They are quiet, but intense and intimate, making every word count. The complexity of these songs is still someting to be marvelled at, as the three electronic musicians behind Nagano create upbeat soundscapes with many speedy and interlocking instruments and melodies. The masterful synth work on “The Pop Life” is something that all the main pop producers, many of whom being fellow countrymen, should look to for their next contributions to major releases.

Although many of these songs are rather one-dimensional, I have to give the band credit for how much fun it sounds like they are having creating it, as Nagano floats effervescently over the chaotic sea of electronic instruments trying to overtake her, the background often emulating a video game boss fight. 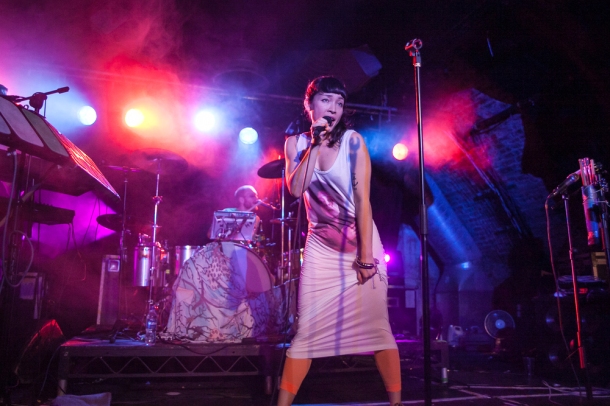 Still, it feels like there are never any shifts in energy in these songs, remaining at the same level throughout as a synth line which is built to be slightly arrhythmic and experimental repeats itself one too many times. Sometimes there is a shift in the instrumental, but nothing in Nagano’s delivery indicates anything surprising just happened. “Should I” is a perfect example of all of these aspects coming together and making what should be a successful novel idea fall flat.

These problems continue to show themselves as 2 of these songs inexplicably extend past 6 minutes, becoming what are easily the most boring and hard to get through track here, adopting more of an atmospheric quality than the rest. Little Dragon is at their best when they are in full upbeat, 80s pop mode, which falls away in the album’s second half. The band used to receive critical praise when this sound was just beginning to re-enter the music scene, due to the precision they can pull it off with, but there is little here that gets me incredibly excited anymore.

Every band has to update their sound once in a while, and 5 albums in this may be overdue for Little Dragon. They have many strengths, they simply need to apply them to music which aspires to be more than pleasant background music with a few eclectic quirks.