Indie-pop duo Phantogram’s third studio effort takes a turn for the uncharacteristic, leaving behind the upbeat and synth-heavy tracks for more of a rock and roll edge. This musical turn is even more unsettling in the wake of their collaborative EP with OutKast’s Big Boi, Big Grams, blending their style surprisingly well with the jazzy southern rap of the latter.

This deviation was also clearly taken in response to the unfortunate suicide of frontwoman Sarah Barthel’s sister. The event overshadows the entire album and makes for the presence of songs which are so personal and unsettling that Three becomes and extremely uncomfortable listening experience. The pain in the voices of Barthel and bandmate Josh Carter, who was very close to Barthel’s sister as well, is disturbingly real. The album is dotted with songs which are more reminiscent of their older work and are nearly on the same level of quality, but the foreboding shadow looming over the project as a whole takes away from the music.

The main issue with adopting the harsher, distorted guitar-driven rock and roll sound which persists throughout the album is that Barthel’s light and airy tone does not work incredibly well with the style, more suited to the dreampop of Phantogram’s past. To blend in with this new musical landscape, producers of the album frequently opt to distort and obscure Barthel’s voice, giving it a more muffled and distant sound. But as shown on better tracks like “Answer”, this is something which should really be allowed to shine.

A glance at the production credits had me quite confused initially, as every single track on the project has a writing and production credit given to none other than Ricky Reed, the man behind many of the most vapid and derivative pop songs clogging the radio waves at the moment. It is interesting that he has another side to him, unexpectedly producing rather heavy-sounding rock music, but it doesn’t make it any better than his other songs. Band member Carter, after anointing himself “the producer extraordinaire” on Big Grams, is still a major contributor, and he lets his grief show in these darker arrangements. The only other major appearance comes from The-Dream and Tricky Stewart on “Run Run Blood”, representing yet another of the album’s confusing musical shifts for the R&B virtuosos.

The album’s positive elements show more similarity to the better tracks on 2014’s Voices, bringing back the more positive-sounding tracks to bring the listener back up from wallowing in the depths – although they still contain references to the death, the fun nature of tracks like “Answer” and “You’re Mine” allow us to overlook it and enjoy the music for what it is. Not a frequent singer, Josh Carter lends his vocals to a few songs and is actually a great presence for the most part. He provides a great duet partner for Barthel as they exchange lines back and forth, voices in the perfect spot of being similar yet distinct that many popular duos have.

“You’re Mine” is the most upbeat song on the album, offering speedy rhythmic synth stabs as Barthel and Carter trade lines and weave through the dominating synth lead. “Answer” is more laid-back, driven by a synth piano loop but still carried into head-nodding territory by a fantastic live drumbeat. “I can’t make you stop when you’re already gone”, the duo sings in unison before the instrumentation explodes into a bridge and the huge chorus concludes the song. 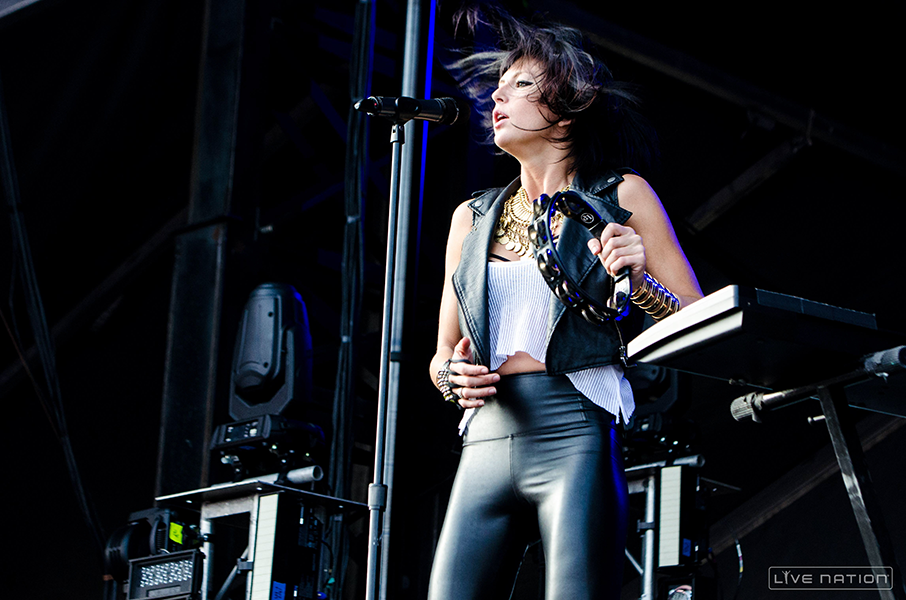 Many tracks on Three actually do have some brief moments of greatness before being overshadowed by other aspects which distract from the song. Single “You Don’t Get Me High Anymore”, which has been met with some success since its release last June, is a quite interesting pop song – the harmonies on “Walk with me to the end/Stare with me into the abyss” are as beautiful as ever –before the tonal shift into the drab chorus sends the song into a darker place than it needed to be. “Cruel World” is another example, the dreampop synth line and breathy Barthel vocals which open the track sound promising before the distortion takes over the rest of the track. Other songs, like “Funeral Pyre” and “Barking Dog”, abandon structure altogether, serving more as an outpouring of grief for the band members. “Barking Dog” sees Carter alone stretching his voice to the breaking point, screaming his pain into the microphone over a cacophony of noise.

The talent for indie-pop songwriting and production Phantogram has displayed before is still clearly here, shown in brief flashes over the duration of this short album. However, an unfortunate circumstance has infiltrated their creative process and the resulting music and tone necessary to convey it does not align with their strengths as musicians. Hopefully, Phantogram will be back in full effect on their next project.