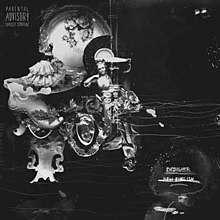 19-year old Brooklyn area rapper Desiigner, the newest signee to Kanye West’s G.O.O.D. music label who took over the world with the release of infectious single “Panda”, has finally released his first mixtape. Although if Desiigner is looking to become anything more than a one hit wonder, there is not a lot here which keeps this hope alive. If you have seen any interviews, live performances, or just about any video with the rapper in it, you know that he is a very strange and off-kilter person, and while the translation of this aspect into his music results in his unbridled energy and joy shining through on “Panda”, it also translates to a very confusing album layout.

Less than half of these songs are even 3 minutes long. Two of them are very brief, instrumental interludes which sound like they would not be out of place in a ballet number (One wonders why, if he displays an interest in other forms of music like this, he remains so mind-numbingly one-dimensional). The biggest hit, “Panda”, is placed at the end. And to break from formula, one song, “Da Day”, is a whopping 6 minutes and 45 seconds in length – and interestingly, is the only other great song on the project.

The main problem with this project is its lack of creativity, an aspect which I would expect to be there in spades after working so closely with Kanye. The rampant jokes about his similarity to Future are bound to continue, because little effort is made to differentiate himself, seemingly content to ride the success of one single with all else an afterthought. Many of the songs are as repetitive as songs can get, with a selection of generic trap beats to accompany them. While I have heard complaints of a similar nature about “Panda”, at least “Panda” contains a rather lengthy verse where Desiigner actually showcases his technical skill as a rapper, dropping a verse which is actually quite hard to keep up with, something which is not replicated on any other song here.

His heavily autotuned cadence makes it quite difficult at times to make out what he is saying, and at full album length this effect can become quite grating. One of the main reasons why “Da Day” stands out is the fact that the effect is toned down and the words are clearer. The song also possesses a fantastic beat switch and vocals which at times sound like Desiigner is going so hard his voice is giving out, and is possibly the only track rivalling “Panda” in earworm potential.

At the same time, even though this project can be quite confusing and hard to get through all at once, you really do have to commend Desiigner for his enthusiasm. A rumoured opener for Kanye’s Saint Pablo Tour, I would probably still be entertained if he came out and performed “Panda” 7 times. The reckless abandon with which he approaches his music impresses and endears us to him for a strange and inexplicable reason. In one of the rare instances where Desiigner forces you to listen to his lyrics, he explains his mixed feelings towards his rapid rise to fame and it is actually somewhat compelling for a man whose choruses often consist of repeating the song’s title ad nauseam. Desiigner is a new and interesting character in the world of music, and with another full length album set to premiere later this year, his journey should be an interesting one. Here’s to hoping he might have another hit one day.