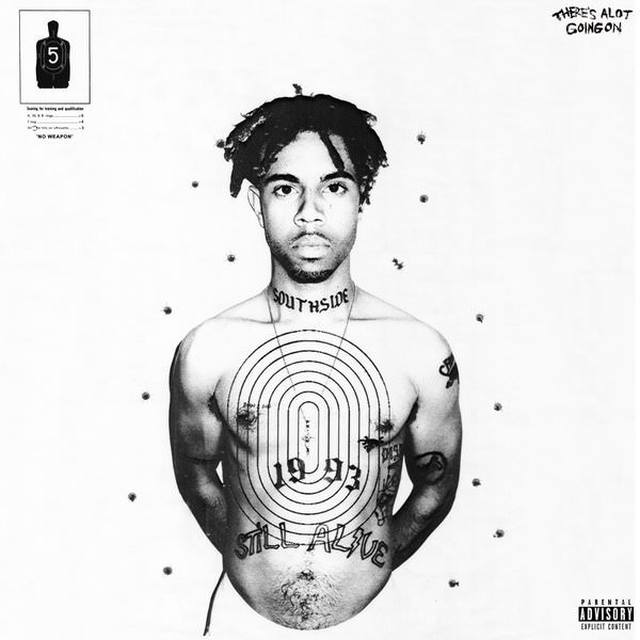 SAVEMONEY affiliate and recent Roc Nation signee Vic Mensa surprise drops a 7-track EP which quells the thirst for his highly anticipated major label debut, Traffic. The album comes in the wake of a number of throwaway trap-influenced singles after signing with Jay-Z’s Roc Nation which were mostly disappointing and in stark contrast with the conscious lyrics and inventive sound present on 2013’s free digital download INNANETAPE. Now, Vic Mensa is back with a vengeance, and even opts to explain why a focus on quality music has not been at the forefront of his life on the very personal title track “There’s Alot Going On” which closes the project. The song feels like an exorcism of Mensa’s personal demons, which includes a struggle with drugs and alcohol, suicidal thoughts, and pressure to live up to idol Kanye West’s artistic vision in his contributions to The Life of Pablo. An extensive tour helped him clean up, get rid of these demons and focus back on the music, and fortunately for the listeners the music has returned to the quality of his previous work in a big way. In addition to this introspective nature, the project turns very political at times, devoting entire songs to events such as the shooting of Laquan McDonald (“16 Shots”) and the Flint water crisis (“Shades of Blue”).

The project is incredibly diverse for a length of only 7 tracks, and as a result it was quite difficult to select a Least Favorite Track for the first time since the creation of this blog – they are all impressive for different reasons, some calling back to the styles he has presented in the past, and some falling more in line with his more recent ventures into trap music – but improving the formula. The influence of contemporaries such as Young Thug is still present on this project (“New Bae” sounds like it could easily be one of his songs, down to the high-pitched autotuned cadence), but unlike his previous work between the release of projects, such as the Kanye-featuring “U Mad”, for the most part this time he has the intelligent lyrical content to back it up. This manifests both in the form of insightful commentary on the world’s issues, and clever double and triple entendres and punchlines found in other lyrically-driven conscious rap artists today such as J. Cole and Kendrick Lamar. Even when the project doesn’t have this aspect at times, it’s simply a lot harder than it has been and speaks to Mensa’s improved beat selection now that music is once again his major focus. The project also harkens back to the slam poetry-like flow and delivery which dominated INNANETAPE, imitating childhood friend Chance The Rapper’s sound on Acid Rap. Tracks like “Shades of Blue” contain an off-kilter flow and great lines like “They got Damn Daniel distracting you on Instagram/Back again with the all-white media coverage” and “Everybody tryna be American Idols/My X Factor is I’m the only one with The Voice”.

Even Vic Mensa’s past as a member of now-defunct indie rock band Kids These Days is brought out on the song “Liquor Locker”, which is set to an acoustic guitar beat and entirely sung rather than rapped. The beats in general throughout the project are very interesting and many do not fit the mold of a typical rap instrumental. More than once an interesting element of Middle Eastern-sounding vocals complements the beat. The singing is quite fantastic throughout as well, especially on closing track “There’s Alot Going On”. These beautiful harmonies are not something we hear from an everyday rapper, especially with this high degree of emotion and passion for what is being said behind them. Mensa throws in a subtle reference to Kanye West’s recent track “FML” on this closing song, and rather appropriately: as Kanye says on his own track “Pour out my feelings/Revealing the layers to my soul”. This is exactly what There’s Alot Going On is for, and it renews my faith in Mensa’s artistry and anticipation for the upcoming Traffic.

Least Favorite Track: Shades of Blue (If I had to choose one)

One thought on “Vic Mensa – Theres Alot Going On”