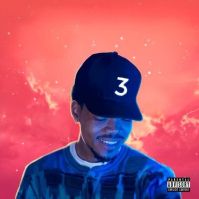 Chance the Rapper has returned with his first solo project since 2013’s soulful and extravagant Acid Rap, and in the process elevates the sound we’ve come to love from him to a new level by infusing it with his newfound interest in gospel music. Chance’s diverse musical palette and wide range of influences and collaborators displayed here does create a highly confusing, almost too experimental album which certainly took me some time to make sense of – but like his new mentor Kanye West’s Life of Pablo earlier this year, somehow, it all just works.

Chance’s intonations and cadences on this album, as they’ve done in the past, drift closer to the realm of impassioned slam poetry – or perhaps in the context of this album, delivering a sermon – than the genre which his moniker suggests. He continues to prove he is much more than Chance the Rapper, as he spans a wide range of genres over the album’s course, not only within the umbrella of hip hop but delving into the world of jazz music as he previously had with his contributions to The Social Experiment’s 2015 album Surf. The Social Experiment make their presence felt on over half of the album’s tracks, including highlights “Angels”, “Blessings” and “Finish Line/Drown”. It is interesting to observe hip hop artists continuing to use the conventions of jazz in their music in the wake of Kendrick Lamar’s magnum opus To Pimp a Butterfly. But while Kendrick opts to rhyme over spiralling, chaotic freeform jazz, Chance gives us bright and cheerful horn sections. It is almost impossible to listen to this album without a smile permanently plastered on your face.

With this being said, Chance’s studio time with Kanye West – the same studio time which produced that outstanding “Ultralight Beam” verse – is clearly evident on this project. Kanye’s recent, oft-tweeted message of “#positivevibes” has crossed over to fellow Chicagoan Chance’s work – yielding tracks which frequently sound like they might have fit directly onto The College Dropout. This is truly creative, experimental work, and like Pablo, it forms somewhat of a beautifully cohesive mess rather than a fully realized cohesive whole. It could be argued that with such drastic shifts in the sounds being delivered, Chance risks alienating listeners as the album continues – this certainly contributed to my initial confused reaction to the project. While Chance leaps across these genres, however, he impressively displays his wide range as a musician, even almost adapting to his guests! He brings on Young Thug and Lil Yachty for trap anthem “Mixtape” and adopts their woozy cadence. He slows things down and joins Justin Bieber in his R&B crooning on “Juke Jam”. He even masterfully picks up Jay Electronica’s complex flow on “How Great” – that being said, Jay Elec absolutely steals the show as he tends to do. Chance’s many talents are on full display here.

A main detraction from my full enjoyment of this album is that often, certain aspects or sections of the songs overstay their welcome. While I certainly did enjoy the religious themes of the project, as it is something you don’t often hear in hip hop music, the 2 minute gospel choir intro to “How Great” before the beat kicks in will not have me itching to give the song multiple listens, regardless of how fantastic Chance and Jay Electronica are on the second half. The albums outro falls into this category as well, as the same 2 lines are repeated for the majority of the track. Also, while I’m sure the Future Hive love Chance’s foray into that world of music, “Smoke Break” is not for me. However, the highlights of the project all reside in its joyful and sunny sounds, and there are many. This is a very special album, continuing the trend of risky and experimental hip hop music paying off. I hope Chance maintains this level of creativity as he continues in his career, and under the wing of Kanye West, it is a safe bet to be as optimistic as Chance himself is on this project.